Religion: The Big (Smelly) One

Ever since the first human began to wonder “where does all this s–t come from?”, people have been turning to religion for answers to questions to which they cannot find a real answer. Thankfully, much has been discovered in the ways of science and the world has lost some of its mystery. However, not everyone is on the side of reason, and people continue to place their faith in God/gods/L. Ron Hubbard/an airborne Italian entree, so I’m here to set the record straight. 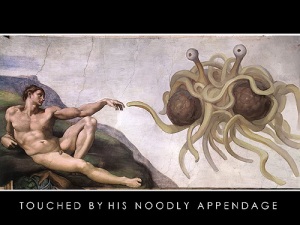 I respect all religions equally (i.e. not at all)

*Note: I will only be discussing Judeochristian fallacy (phallicy, more like) as I have limited experience with other cultures thanks to the fact that I live in a quarantine-type Jewish community.

Written by nomadic, pastural sheepf–kers in the desert over 2000 years ago, the Hebrew bible (Torah) remarkably maintains a steady audience even in America, a decidedly developed nation. Aside from teaching morals or whatever those hebes are telling parents nowadays, it is essentially a collection of stories about an omnipresent but intangible, invisible, and undetectable man (yes, man; he is referred to as a king several times) who tells people to do unreasonable things to prove they love him and upon refusal, smites the bastards. This kind of behavior is more suited to a psychotic girlfriend than a benevolent deity. For example, God tells Abraham to kill his son, Isaac. Why? To test his faith. Incredibly, Abraham, the O.G. of sheepf–kers, obliges. He takes the kid to the top of a mountain, and as he is about to slaughter him like a sacrificial lamb, God yells from the heavens, “WTF are you doing, man?! You thought I was serious?!! Yo, angels, look at this a–hole, he was gonna do it!” or some divine equivalent. Abraham then goes home and continues to worship the figure that speaks to him but that nobody else can hear and not even he can see. If you ask me, that sounds more like schizophrenia than a holy presence.

Your local rabbi on his day off

This entry was posted on November 7, 2010 by CRYM. It was filed under Funny Ish, Random Thoughts and was tagged with Abraham, God, Hebrew Bible, Jews, Judaism, Old Testament, Religion and Spirituality, Torah.