Did ya miss me? I decided to take Thanksgiving week off, but like T.I. I am back!

Best Quotes of the Week

“I’m like actually OCD so I like hate waking up to an odd number, so I set my alarm for 6:49.” She could not be convinced that 9 is in fact an odd number. DWB.

(In the same class, from the teacher:) “Your skin is made of what you put in your body. You put garbage in, you get garbage out. Write that down.” What?DWB.

My math teacher uses the word “iff” to denote and emphasize “if and only if” when describing a mathematical rule or theorem. The first time he did this in class, several people expressed confusion immediately before he explained the significance of the extra “f”. A full 15 minutes later,

In psych, we watched a clip about a woman who, due to damage to structures within her ears, cannot maintain her balance with her eyes closed. One girl chimed in,

That’s all for this week and again, be glad you don’t live here. 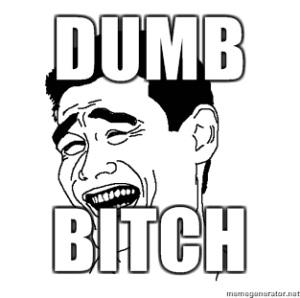 The vast majority of my daily emotions can be expressed by internet memes.